Hey all, this is part 2 of setting up an CentOS server. For backup and accessibility, I always set up a Samba share. Samba is a filesharing protocol supported by Microsoft Windows, Linux and MacOS and I therefor prefer this type of fileshare over others in terms of compatibility. If you want to see other parts of this series:

Samba can be challenging to set up because of the complexity and the amount of configuration options, however, for the purpose of a homeserver, we’ll keep it simple. We’ll associate the rights of the share with a local linux user account on the target machine and we’ll share the /opt/* folders to allow us to remotely access configuration files of the docker containers that we’ll be setting up in a future tutorial.

To start with Samba, we first have to install it:

Let’s start samba and let it run by default:

Then, before proceeding with the configuration of Samba, let’s first prepare the machine in terms of firewall and SELinux:

Create the directory which will be shared:

The directory will now be owned by root, however, I want this to be owned by my user, which i called linux earlier. When checking the permissions, this will be the result:

In the first line, the permissions on the folder are adjusted to allow the logged in user to read and adjust the files, but not for anonymous users. This is recursive for all folder below. Then, the folder’s owner is changed to the user linux and group linux, and finally, SELinux is setup to allow folder access. Otherwise Samba won’t work properly. SELinux is typical for RedHat distributions, such as CentOS. This command is not applicable to Debian distros.

Also, even though this is optional, it’s strongly recommended to secure the server by using a smbgroup and authenticate the user. The configuration of Samba below assumes you’ll complete the following steps as well.

Now we can get on with Samba configuration.

This already contains a config in some cases. You can choose to back it up, or to overwrite it. Backing up would work like this:

Then, the following code can be inserted into the file:

In this case, you need to fill in the computername on the top as it would appear to other computers in the network. Under the [Docker] share, make sure you fill in your local user under valid users =.

Test the validity of the configuration:

Now you’ll be able to connect to the share on other computers, in Windows by pressing Windows Flag + R and typing \\.

On MacOS, in Finder go to the taskbar Go > Connect to server..

Fill in the server IP address:

Click connect and then login with the credentials created in this tutorial in the security section. Then all available shares are visible: 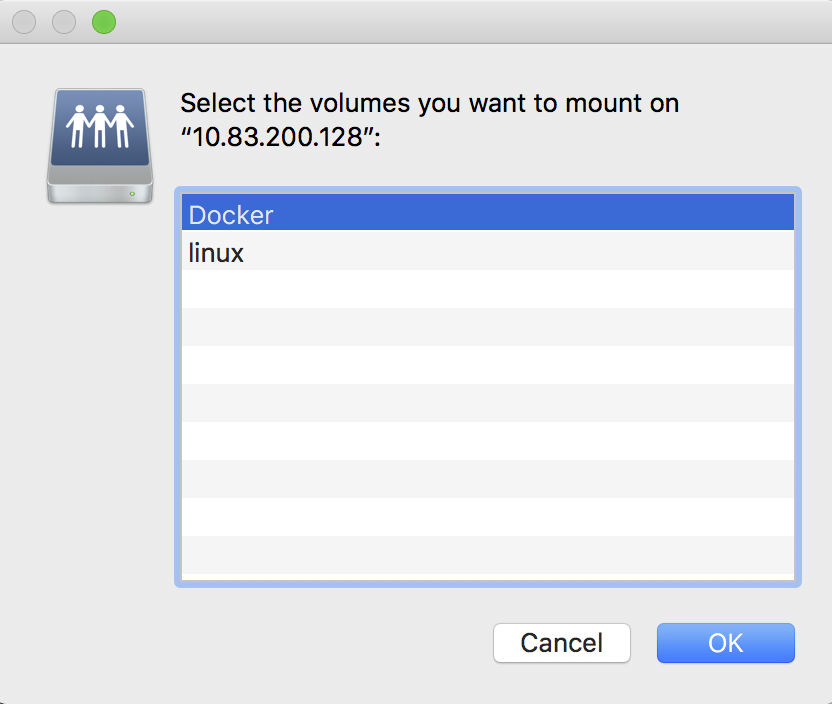